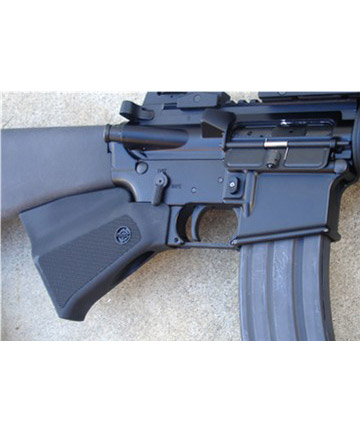 Selector – RRA Ambi Selector: Critical for still using your selector from the right side of the receiver where your thumb is!

NEW!: Be sure to check out new MonsterMan Grip AR15 Standard Compliance Package for additional savings on everything you need to build a CA or NY compliant lower receiver.

Is the MonsterMan Grip CA DOJ approved? Of course not. The manufacturer attempted to get CA DOJ approval, but was he told that it was up to the 58 DAs in the State of California to determine the legality of the MonsterMan Grip. As a result the maker of MonsterMan Grip makes no claim that this device is California legal nor can he be held responsible for its misuse. Ten Percent Firearms also makes the same claims. Update: On November 3, 2010 Special Agent Frank Navarro of the CA DOJ Bureau of Firearms testifies under oath that the MonsterMan Grip does not meet the definition of a a pistol grip in Tulare Superior Court in the case People vs. Haack.

In order to help facilitate the lawful use of this device, here is a reminder of the assault weapons rules.

(1) A semiautomatic, centerfire rifle that has the capacity to accept a detachable magazine and any one of the following:

(A) A pistol grip that protrudes conspicuously beneath the action of the weapon.
(B) A thumbhole stock.
(C) A folding or telescoping stock.
(D) A grenade launcher or flare launcher.
(E) A flash suppressor.
(F) A forward pistol grip.

(2) A semiautomatic, centerfire rifle that has a fixed magazine with the capacity to accept more than 10 rounds.

(3) A semiautomatic, centerfire rifle that has an overall length of less than 30 inches.

So remember, if you are going to use a detachable magazine with the MonsterMan Grip, you cannot have any of the items A-F from above also on your rifle or you are committing a felony.

The MonsterMan also recommends that you purchase a ambidextrous selector switch in order to make operation of the safety with your trigger hand possible and to give your thumb something to rest on while using the MonsterMan Grip.

New York Update
With the passage of the New York State Safe Act, New Yorkers are now facing the same ineffective restrictions on their civil rights as us Californians. We are sorry to welcome you to the party. The good news is we have been dealing with this for years now and the same stupid politicians continue to make the same stupid laws.

First, New Yorkers need to understand the New York State Police do no make law. They have published a list named WEAPONS AFFECTED BY THE NEW GUN LAWS. IGNORE THIS LIST! The list is not law. Your state police are using a common anti-civil rights tactic called FUD (Fear, uncertainty, and doubt). They are going to scare you into giving up and registering your rifles. If your gun is on that list, it means nothing.

What does mean something is the actual law itself which can be found on that same website, but just in case we don’t trust the state police to be an accurate conduit of the law, let’s look at your actual law from the actual state senate’s website.

If you scroll down through that law, you will find no list of firearms that will be illegal. What you will find is Penal Code Section 265 Subdivision 22 that states…

22. “Assault weapon” means(A) A SEMIAUTOMATIC RIFLE THAT HAS AN ABILITY TO ACCEPT A DETACHABLE
MAGAZINE AND HAS AT LEAST ONE OF THE FOLLOWING CHARACTERISTICS:

(I) A FOLDING OR TELESCOPING STOCK;
(II) A PISTOL GRIP THAT PROTRUDES CONSPICUOUSLY BENEATH THE ACTION OF
THE WEAPON;
(III) A THUMBHOLE STOCK;
(IV) A SECOND HANDGRIP OR A PROTRUDING GRIP THAT CAN BE HELD BY THE
NON-TRIGGER HAND;
(V) A BAYONET MOUNT;
(VI) A FLASH SUPPRESSOR, MUZZLE BREAK, MUZZLE COMPENSATOR, OR THREADED
BARREL DESIGNED TO ACCOMMODATE A FLASH SUPPRESSOR, MUZZLE BREAK, OR
MUZZLE COMPENSATOR;
(VII) A GRENADE LAUNCHER;”

First, you cannot get a pistol style grasp on the Monsterman Grip and in our opinion it does not protrude conspicuously. Further, we do not believe it is any different than the stock of the M1A or Mini-14.

There are no reviews yet.